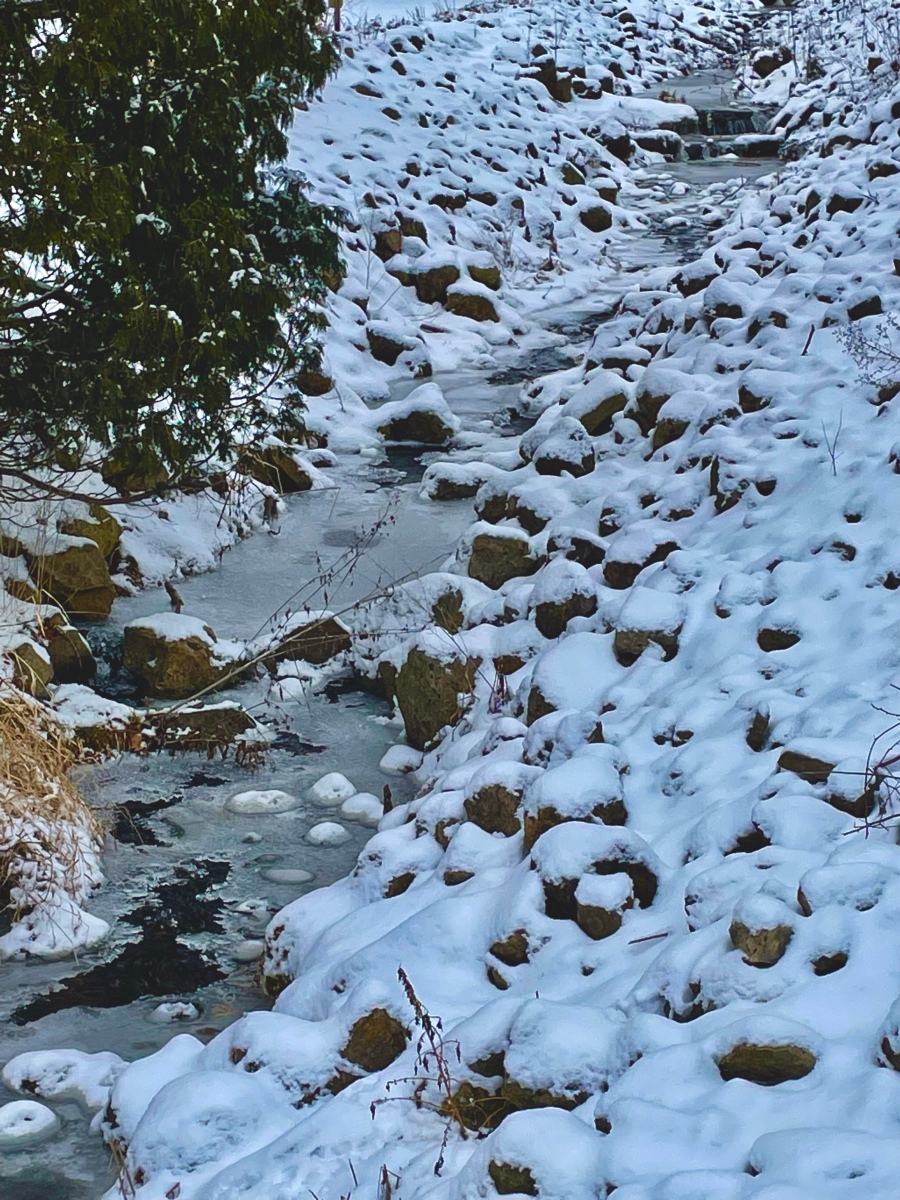 I took a class on Indigenous religions the fall of 2021. For our final project, we had to explain the mythographic landscape of our home using depth psychology and motifs from Indigenous storytelling. My mythos centered on Brewing Mother, a name that I gave to Brewery Creek. Brewery Creek runs behind my house, and though she is a gentle flow most days, I know that she has swelled and consumed much of my backyard at points in her past. I have always had an affinity for running water, and I am blessed to have made my home along the creek.

In the myths of my home, Brewing Mother is the most important of all spirits, and perhaps the only one that can be considered a god. All life in the region, including the hills and the rocky outcroppings owe their existence to the ebbs and flows Brewing Mother. She provides the drinking water for the crops, the prairie animals, and the humans in the area. Her children are the mine (Brother Christmas) and the Point (Sister Point), who she eroded from the landscape over thousands of years. Brother Christmas and Sister Point stand guard over their mother and over the town that has grown up around her.

The Birth of Brewing Mother

Before there was anything else in the valley, there arose Brewing Mother. One day, as Sun fell on dry, barren Earth, a mound of dirt thrashed, split, and spilt clear water over the land. Thus did Brewing Mother birth herself. She roared and ragged in the birth pangs of Earth, and she flooded the valley. No trees were left, nor was there any stone poking above Brewing Mother’s vast depths. She consumed and churned and frothed in her freedom.

After countless millennia, Brewing Mother felt her womb grow full. It was a slow build of pressure in her depths at first. Then the pressure became greater and greater still until it consumed Brewing Mother’s belly. Eventually she could hold the burden no longer, and she opened herself to the sky. From her chasm were birthed twins: Brother Christmas and Sister Point. As the siblings rose from Brewing Mother, so did Brewing Mother descend, falling back to Earth from which she had birthed herself long ago.

Still wet with foamy afterbirth, Brother Christmas and Sister Point gazed down at their mother below them. Brewing Mother was no longer ravenous and raging; she was now but a steady stream nestled in the valley.

“It is right that it would be so,” shot Sister Point, “for she birthed us and continues to give life to the valley.”

Sister Point placed herself at Brewing Mother’s head and Brother Christmas laid down at his mother’s seat. Nestled between her children, Brewing Mother made a promise: “As long as my children are loved,” she gurgled, “I will provide this land with corn and deer, wheat and rabbits, and all manner of life. But, should my children be mistreated, my wrath will fill the valley once more.” Then did Brewing Mother grow quiet, until she was just a slow rustle amongst the grasses and the fallen leaves.